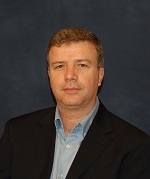 Department of Mechanical and Industrial Engineering, University of Toronto, Canada

Prof. Ridha Ben Mrad, P. Eng., FCSME, is the Director of the Mechatronics and Microsystems Group and a Professor in the Department of Mechanical and Industrial Engineering, University of Toronto.  He joined the University of Toronto in 1997, having previously held positions at the National Research Council of Canada in Vancouver, BC, and the Ford Research Laboratory in Dearborn, Michigan.  Prof. R. Ben Mrad received a PHD in Mechanical Engineering from the University of Michigan, Ann Arbor in 1994. Prof. R. Ben Mrad’s research interests are mechatronics, energy harvesting using smart materials and Micro Electro Mechanical Systems (MEMS). His research led to a number of patents and inventions including 9 US patents.

Prof. R. Ben Mrad is the author/coauthor of more than 180 refereed research publications.  He has supervised the research of over 60 graduate students and researchers, and received the Faculty Early Career Teaching Award in 2002 and the Connaught Innovation Award in 2013.  Prof. R. Ben Mrad serves as Associate Chair of the IEEE Industrial Electronics Committee on MEMS and Nanotechnology, and the Executive Board of the CanSmart Group. He is currently a Technical Editor of the IEEE/ASME Transactions on Mechatronics, Editor of the IEEE IE Tech News, and serves on the Steering Committee of the IEEE JMEMS. He was also a Guest Editor of the IEEE Transactions on Industrial Electronics. Prof. R. Ben Mrad also served on the NSERC Mechanical Engineering Grants Committee (2008-2011), was as a founding Director of the Institute for Robotics and Mechatronics at the University of Toronto (2009-2011) and was Associate Chair of Research of his department (2009-2012).